Are you fully compliant with the CRS, MDR and DAC6?

In the near future, we will see the commencement of two new tax regimes, which have the purpose of continuing efforts towards providing visibility to global tax authorities of arrangements which, potentially, could lead to the avoidance of tax.

In the Channel Islands, the Mandatory Disclosure Rules (MDR) will come into effect. These rules are based on OECD rules, designed to prevent the circumventing of Common Reporting Standards (CRS) and to tackle structures which disguise the beneficial owners of offshore structures (Opaque Offshore Structures).

The EU rules on cross border tax arrangements, commonly referred to as DAC6, will take effect in the EU and the UK. These rules are designed to provide EU tax authorities with far greater visibility on cross border arrangements involving at least one EU country, where there is the potential for the tax base to be eroded.

Both sets of rules bring with them additional reporting requirements for Channel Islands based intermediaries and providers of services to taxpayers, which have cross border elements to their affairs. The strict disclosure requirements and broad scope, in particular of the DAC6, make this one of the most significant changes for service providers and taxpayers in recent years. 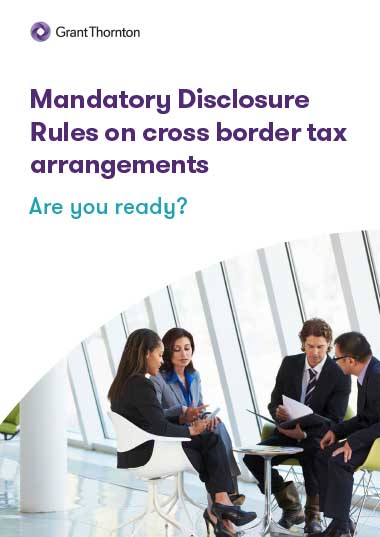 The Rules – A Definition

The MDR requires Channel Islands based intermediaries to report specified information to the Comptroller of Taxes (Jersey) or Guernsey Revenue Services, where it is ‘reasonable to conclude’ that either:

The application of DAC6 is broader than the MDR. The DAC6 applies where there is a cross border arrangement between taxpayers in two (or more) EU member states, or a taxpayer in one non–EU state and another in an EU state.

The intent is to require reporting to be undertaken by an intermediary, or in some cases the taxpayer directly, to an EU tax authority, where it is believed that an arrangement meets one or more specified ‘hallmarks’. The DAC 6 was originally billed as counteracting extremely aggressive cross border tax planning. However, the text of the final regulations means that what would normally be viewed as fairly standard commercial arrangements, may require reporting.

For example, there can be a need to report cross border financing or rental payments made between related parties, where the recipient is subject to a low/zero rate of tax on the income. To be reportable, one of the categories or ‘hallmarks’ of tax avoidance must be breached - certain hallmarks have built into them a tax avoidance motive test, but others do not; thus further widening the scope of what may need reporting.

A further difficulty under DAC6 is that although it is based on EU rules, the implementation at national level is left up to individual countries, leading to some important differences in what requires to be reported, and by whom. When it comes to MDR and DAC6, in particular the latter, identifying what does, and what does not require reporting, will be difficult. There will undoubtedly be some grey areas in between, which are widely open to interpretation.

Who is responsible for reporting?

Similar provisions under both rules mean that the reporting is due by an ‘intermediary’ which is defined as including both a Promoter, and a Service Provider. Those who will be intermediaries include trust companies, banks, lawyers and tax advisors. There is no get out for not being in the business of providing tax advice.

In certain circumstances, the taxpayer themselves may be required to make a report. For example, under the DAC6, if a Jersey intermediary has no UK nexus (i.e. no office or other presence in the UK), but the arrangement does involve a UK taxpayer, then the requirement to report may fall to the taxpayer directly. Such an intermediary should still decide whether it has a duty to understand that a DAC6 report may be necessary, and advise or assist the taxpayer in making that report.

Thus for a Channel Islands based intermediary, it is important that both the MDR and DAC6 are understood within the business.

What if reporting is missed?

When is the reporting required?

The DAC6 has been delayed a number of times, but will come into full effect from 1 January 2021. From then, reporting is due on an ongoing basis, being 30 days after the date on which a reporting trigger is met. There is also a backdating requirement, whereby reportable arrangements, which have had their first steps taken since 25 June 2018, require to be included in a report to be made no later than 28 February 2021.

The exact timing of MDR is currently uncertain, but it is anticipated that it will enter into effect at around the same time as the DAC6. Though a degree of backdating can apply under the MDR, it is not such a broad requirement. Given the tight time frames on reporting under both regimes, being in ‘real time’ as opposed to a year end exercise, it is vital that proper processes and procedures are in place to capture these reports timeously.

What are the Next Steps?

Our team are ready to support you

Grant Thornton Channel Islands are supporting a number of clients to get ready for these regimes and the reporting requirements they each demand. We can help you ensure that your internal procedures and processes allow for full compliance with the ever increasing demands that stem from each of these regimes.

The tax landscape is in a period of hyper change. At Grant Thornton Channel Islands, we are constantly looking for ways to support our clients and service providers so they remain ahead of the game with the ever changing tax legislation and practice.