Cloudy with a chance of complacency

The OECD’s latest proposals on taxing digital business pull back from the radical roadmap put forward in May to something much closer to the January policy note by proposing a modified residual profit split with benchmarking of routine profits.

What then do the latest OECD proposals say, what do they leave open and what are the risks that need to be addressed?

Some of the latest key developments include narrowing the scope to large enterprises carrying out business-to-consumer (B2C) transactions. It also looks like the arm’s length principle is back from the brink, having appeared doomed under the earlier proposals, though this is only a partial reprieve.

But the sighs of relief among mid-size multinational enterprises (MNEs) are likely to be tempered by continuing uncertainty over the type of commerce covered and size of affected businesses. Moreover, anything the OECD eventually agrees will only be a recommendation, leaving governments to frame their own measures and hence heightening the risk of double taxation and dispute.

On 9 October 2019, the Organisation for Economic Co-operation and Development (OECD) launched its latest attempt to find a workable solution for these vexed digital taxation issues. After floating a radical overhaul in May, which would have caught pretty much every business in its net, the new Pillar 1 (allocation of profit and new nexus rules) proposals appear to be limited to large enterprises that deal with consumers.

The OECD has made an effort to take most small business out of the scope. This includes a combined group turnover threshold – mentioned as €750 million in line with country-by-country (CbC) reporting, but this is only a suggestion for consideration. If €750 million does emerge as the rule of thumb, a good many mid-size MNEs would be covered, rather than just the Big Tech giants. Moreover, like CbC, the door is open to individual markets to lower this, which leaves considerable concern for businesses that do not have a large tax department able to respond to the additional demands.

The OECD has also sought to retain some elements of the arm’s length principle, with a supplement for enterprises that are in scope. The suggested approach consists of a blend of residual profit and a formulaic allocation for each consumer market based on levels of sales. This could be calculated by using consolidated financial statements. The revised proposals recognise that a simultaneous implementation and an effective dispute resolution mechanism are needed to make this viable. Both in turn require a high level of agreement between jurisdictions that could have different and even competing priorities and different formulas.

Consultations are ongoing until 12 November 2019. This will be followed by a consultative meeting in Paris on 21 and 22 November. The OECD continues to target a political agreement leading to the basic tax policy architecture to be released in early 2020. This would pave the way for detailed technical work to be carried out during the year.

It’s hoped that some of the grey areas in the OECD proposals can be clarified as part of the consultations and subsequent review of responses.

What does this mean for your business?

The big shift between the OECD’s May and October proposals turn this from an economy-wide shake-up to a business specific challenge. However, the grey areas within the latest recommendations (eg the uncertain line between B2C and B2B) and how any new rules might be applied on the ground (eg lower turnover thresholds) open up the danger of assuming that you are not in the scope when you are.

Three steps your business can do now to prepare?

We hope that you found this update useful. If you would like to discuss any of the issues in more detail or if you would like assistance modelling how the proposals may affect your business, please contact one of the contacts listed in the article or speak to your local Grant Thornton office. 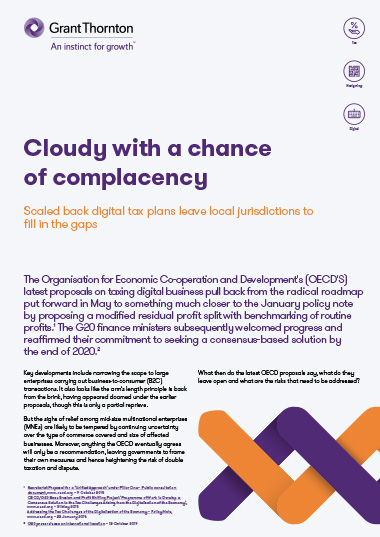