The IASB has published 'Annual Improvements to IFRSs 2014-2016 Cycle' which addresses non-urgent (but necessary) minor amendments to three Standards, as described below.

This publication is a collection of amendments to IFRSs resulting from issues that were discussed by the IASB during the project cycle for making annual improvements that began in 2014 and which were included in an Exposure Draft published in November 2015. The IASB uses the Annual Improvements process to make necessary, but non-urgent, amendments to IFRSs that will not be included as part of any other project.

By presenting the amendments in a single document rather than as a series of piecemeal changes, the IASB aims to ease the burden of change for all concerned. A summary of the issues addressed is set out below: 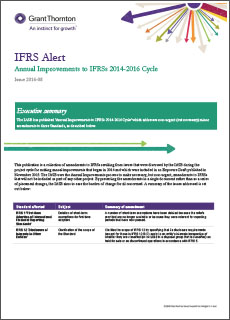